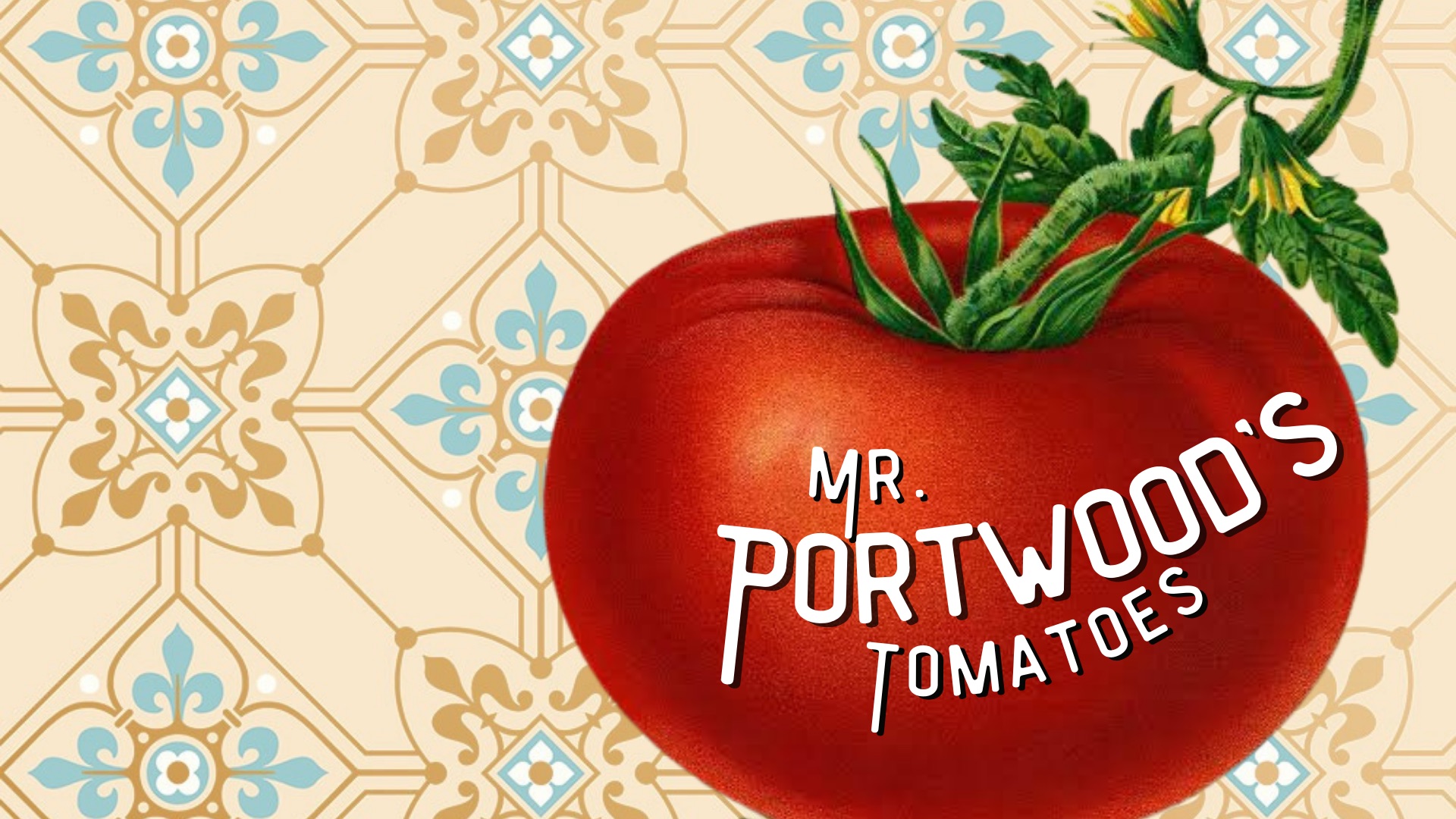 Every week in summertime, he’d visit the bank where she worked, set up shop in a vacant office and sell his prize Better Boy tomatoes.

By Lucy Mercer with an illustration by Stacy Reece

On sweltering July days, in the kind of heat that would cause my mom to say “there wasn’t a breath stirring,” I walk out to my garden and check on my tomatoes. I eat a couple of the small cherry tomatoes, the gardener’s treat for all the soil, sweat and emotional energy invested into the fruit. They’re good, because homegrown tomatoes eaten on hot days taste like drops of distilled sunshine encased in a slightly mineral bubble skin.

But are mine as good as Mr. Portwood’s prized tomatoes?

Mr. Portwood was a customer in the bank where I worked, and he grew tomatoes. Each summer, when the harvest came in, he would bring his tomatoes to the bank. First, he’d escort his wife into the bank and seat her on the sofa in the waiting area, then he’d go back to his sedan and bring back a box of tomatoes and a scale.

Mr. Portwood was a savvy businessman, and he knew how to work a room. He’d make sure all the tellers knew that he had red, ripe tomatoes ready to sell. He set up shop in an unused corner office, selling tomatoes by the pound. The tellers took turns, shutting down our windows, and shifting customers right or left, so that we would have a chance to score  Mr. Portwood’s prize-winning tomatoes for our own.

One of the great things about growing tomatoes is that it gives you something to talk about through most of the year. This is valuable when one is, say, a bank teller, and you make small talk with the customers. Knowing that the person on the other side of the counter is a gardener gives you something to discuss while you’re cashing checks, checking balances and transferring funds. This is how I know that Mr. Portwood believed in getting his tomatoes in the ground on Good Friday, a Southern tradition that required frost protection when Easter came early.

I also learned that Mr. Portwood favored Better Boys, a reliable classic, just right for home production. “Do one thing and do it well” is a maxim that fits Mr. Portwood to a T.

Once off the line, I’d grab my cash and scoot over to the corner office, where I could pick out the best looking tomatoes and watch as Mr. Portwood placed them on the scale and then in a bag. I’d settle up and take my paper bag of homegrown tomatoes back to the teller line.

At home in my kitchen, I’d make the requisite summer sandwich, tomato and mayo on white bread. Growing up in South Carolina, my mama bought Bunny Bread, the most aptly named food product I can recall. If I put a slice of tomato on a piece of Bunny Bread, it would be a squish fest. Mature me likes tomato sandwiches on a sliced baguette, with low fat mayo and sometimes arugula. Weird, I know.

I’d also make tomato gravy to go with homemade buttermilk biscuits, and if I had more fruit, roasted tomato jam. Mostly, though, I sliced up the tomatoes as neatly as I could, using my German tomato slicer knife, spread the slices, slightly overlapping, on a dinner plate and sprinkle with flakes of salt and cracks of peppercorns, and serve.

I worked at the bank for just a few years. I can count on one hand everything I miss about being a bank teller, and four of the five things were Mr. Portman’s tomatoes. For a few summers after I left, my friend at the bank would text and let me know that Mr. Portwood  planned to be in the next day and that she would pick out tomatoes for me.

I grow my own tomatoes now. I’ve had seasons where I grew crazy amounts of vegetables, but aside from herbs and occasional experiments with carrots and lettuces, I grow mostly tomatoes and peppers. My process has tightened up. I try to plant in late April, after the average date of last frost (here in Atlanta, that’s April 14), and due to the heartbreak of the tomato hornworm, I no longer plant slicer tomatoes. 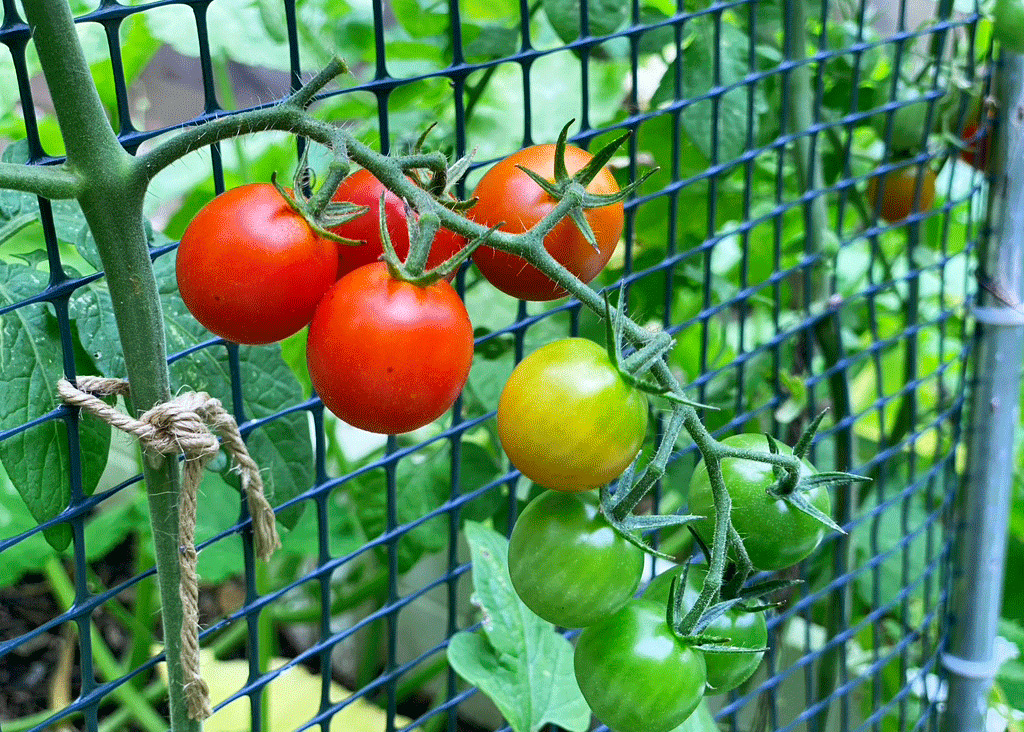 I blame squirrels, too. There is so much heartbreak in the “one more day” on the vine. That extra day was just too tempting to the squirrels. And what the squirrels didn’t get, the tomato hornworms went after.

Instead of slicers, I hedge my bets these days and grow prolific cherry tomato varieties like Sweet 100s. I figure the tomato/tobacco hornworm is going to do his damage, but I’ll be able to catch him in time, before he destroys most of my crop.

In the pandemic spring, my husband installed a keyhole garden, a raised garden bed with a built-in compost basket. The plant scraps break down at soil level and in turn, nourish the garden. On Good Friday 2022, I planted a half dozen cherry tomato vines in my keyhole garden.

Mr. Portwood passed away a few years ago, but I think of him around Good Friday, when seedlings fill the shelves at the garden center, and also on hot summer days when I step outside and feel like my breath is being sucked out of my body. That’s when the tomatoes start to ripen and summer’s glory begins.

Lucy Mercer with an illustration by Stacy Reece