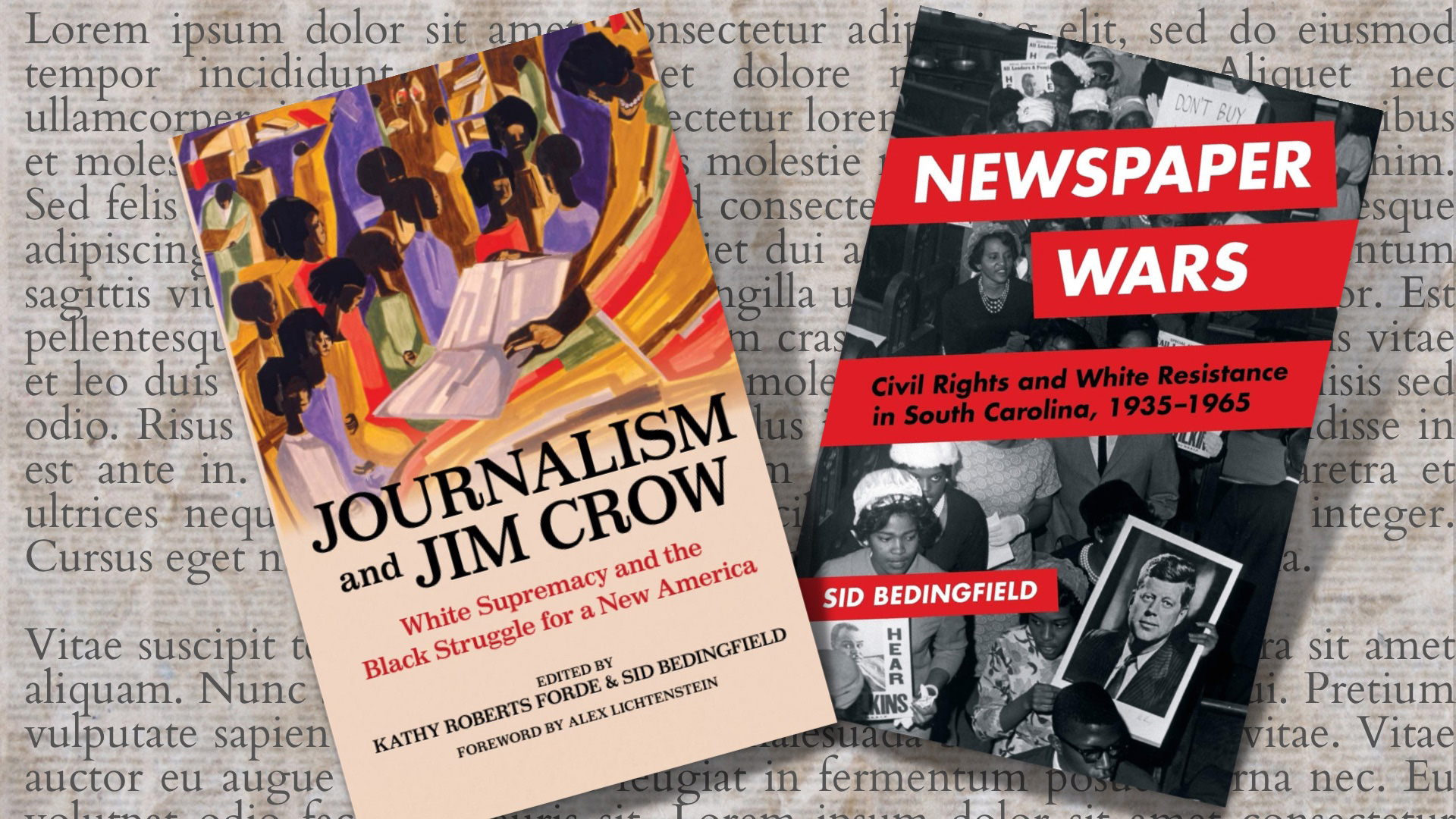 Something to Read: Coloring the News

By Rob Rushin-Knopf with illustration by Stacy Reece

Cliché has it that journalism writes history as it happens. The actual history of journalism takes that claim to the woodshed. Too often, journalism strives to create the history.

In Journalism and Jim Crow: White Supremacy and the Black Struggle for a New America (University of Illinois Press), editors Kathy Roberts Forde and Sid Bedingfield collect 10 scholarly essays (including two each by the editors) that examine specific instances where wealthy White interests shaped public opinion through ownership and control of dominant news outlets — and some of the Black journalists who pushed back against the supremacist narrative.

With so much current media pushing doctrinaire lines, it is instructive to reflect on how often journalism pushes one world view over another despite boasts of being impartial chroniclers of fact. Aside from unconscious bias — the mythical view from nowhere is nowhere to be found — economic considerations play a crucial role. The powerful commercial interests who kept the major papers afloat expected friendly, and often dishonest, coverage of certain issues. In the Jim Crow South, this included voting rights, economic opportunity, and education disparities (e.g., separate but equal schools).

For now, let’s stick to two of the deadliest: convict leasing and lynching.

The volume begins with a detailed survey of that once-revered paragon of New South tolerance and civility, Henry W. Grady, whose name adorns the University of Georgia College of Journalism & Mass Communication. (Full disclosure: both I and the editor of this publication are graduates of the Grady College.) Grady was a famous advocate of what he called the New South, one that transcended the unpleasantness of slavery and stood on the cusp of a brighter, more industrialized future. A remnant of the Lost Cause fantasy, the New South pretended to race-neutral idealism. Grady’s Atlanta Constitution was its official state organ.

Grady and his wealthy patrons aimed to maintain White Supremacy behind a more civil face while supporting a continuation of slavery under the guise of law and order. Not only was Grady a vocal supporter of convict leasing (wherein majority-Black inmate populations were rented out to commercial enterprises), he and his Atlanta cronies were direct beneficiaries. Reports of prisoner abuse and deaths were swept under the rug while glowing features about the scheme’s great success received prominent placement.

In another chapter, we learn about Grady’s tacit support of the lynching campaign that plagued America. Originally a Ku Klux Klan franchise, lynching matured into a more family-oriented enterprise, with the press helpfully publishing time/place information for quasi-planned events and after-the-fact justification for more spontaneous eruptions of law-and-order fervor.

Atlanta Constitution editor Henry W. Grady and his wealthy patrons aimed to maintain White Supremacy behind a more civil face while supporting a continuation of slavery under the guise of law and order.

Subsequent chapters explore these themes further. In Florida, Standard Oil millionaire (mere millions meant something then) Henry M. Flagler made tourism his pet project. This manifested in the construction of several railroad lines across the state, an industrial feat that depended upon cheap and disposable labor. With no slaves available, convicts would serve instead.

Flagler assembled a chain of prominent newspapers from Miami to Jacksonville to enable his achievements. Like Grady, Flagler benefited directly from the convict lease pipeline. The Sunshine State was built on the backs of 20th century laborers indistinguishable from the slaves of the 19th.

Other chapters consider the counter-efforts taken by Black journalists like Ida Mae Wells and W.E.B. DuBois. Taken together with Bedingfield’s earlier Newspaper Wars: Civil Rights and White Resistance in South Carolina, 1935-1965, we begin to understand how some Black-owned newspapers created counter-narratives and rallied resistance that culminated in the mid-20th century Civil Rights Movement. In turn, the remnants of the Jim Crow press inflamed white resentment to generate backlash to expanding civil rights, leading to what Bedingfield terms the “great white switch” that spurred the transformation of the GOP from the Party of Lincoln into the nearly all-white party of Trump.

In a time when a cry of “fake news” poses as serious political discourse, these books offer useful insight into the relationship between media and the economic/power relationships that can color news coverage.

Rob Rushin-Knopf blogs about culture at Immune to Boredom.