Tom Hendrix spent 30 years building a wall that is neither a barrier to keep anyone out nor a monument to glorify its builder. It is, instead, a portal to the past. It pays tribute to a courageous Native American ancestor and what her life's journey teaches us about our common humanity and the profound significance of how we order our steps in this world.

By Shawn Pitts with photographs by Bryan Huff

Tourism professionals bill it as the largest freestanding, un-mortared stone wall in America. That makes it sound like it’s in the same marketing category with the world’s cheesiest roadside attractions, like the world’s largest ball of twine or a herd of taxidermy jackalope. If you go looking for that sort of thing, you’ll be disappointed.

But if you just stand in that space in northwestern Alabama, clear your mind, and breathe in the rugged, sinuous beauty of the Wichahpi Wall, you will sense the indomitable spirit who inspired it. That is all Tom Hendrix ever wanted.

The Natchez Trace Parkway, a majestic 444-mile ribbon of national park extending from Natchez, Mississippi, to Nashville, Tennessee, meanders only 33 miles through the northwest corner of Alabama. The most spectacular natural feature of this short section of the scenic byway is the glorious blue expanse of the Tennessee River. The crossing rivals the swell of the mighty Mississippi at the Trace’s southernmost point and dwarfs the Cumberland at its northern terminus.

Roughly 10  miles north of the river, near the Tennessee state line, stands an improbable stone monument built by a retired auto industry worker named Tom Hendrix. It honors his great-great-grandmother, Te-lah-nay, a Native American woman he never met. Naturally, the story of the river and Hendrix’s indigenous ancestors are intertwined.

This section of Alabama is perhaps most identified with the music that emanated from the fabled Fame and Muscle Shoals Sound studios. Gods in the pantheon of popular music walked the earth here: Aretha Franklin, Bob Dylan, Wilson Pickett, Lynyrd Skynyrd, Otis Redding, Paul Simon, the Staple Singers, the Rolling Stones, Etta James, Duane Allman. The list goes on and on. But long before legendary producer Rick Hall or hit-making studio bands like the Swampers put their stamp on Muscle Shoals, music was in the water.

Te-lah-nay and the small band of Yuchi people who once called these lands home held the Tennessee River sacred, and communed with her as Nunnuhsae, “The Singing River.” According to native lore, a mystical, musical connection to these waters provided physical and spiritual sustenance to the Yuchi. But beginning in the 1830s, they were lumped into the diverse group of displaced Native Americans subjected to the horrors of the Indian Removal Act. The primary water route and several of the overland routes we now call the Trail of Tears converged near present day Muscle Shoals; the Yuchi never stood a chance.

Out west, the rivers sang no familiar songs and offered no solace or guidance to Te-lah-nay. She knew where she belonged, and it wasn’t Oklahoma. Practically upon arrival, she undertook a grueling five year journey back to Alabama, where she married and lived out the rest of her life in Nunnuhsae’s peaceful embrace, passing her stories and songs along to those she loved.

Tom Hendrix grew up on these tales and then became the family’s tradition bearer. But it was a stirring encounter with a Yuchi elder that set him stacking stones. “All things must pass through this world,” the shaman reportedly told Hendrix when he visited tribal headquarters. “Only the stones will remain; we honor our ancestors with stone.” 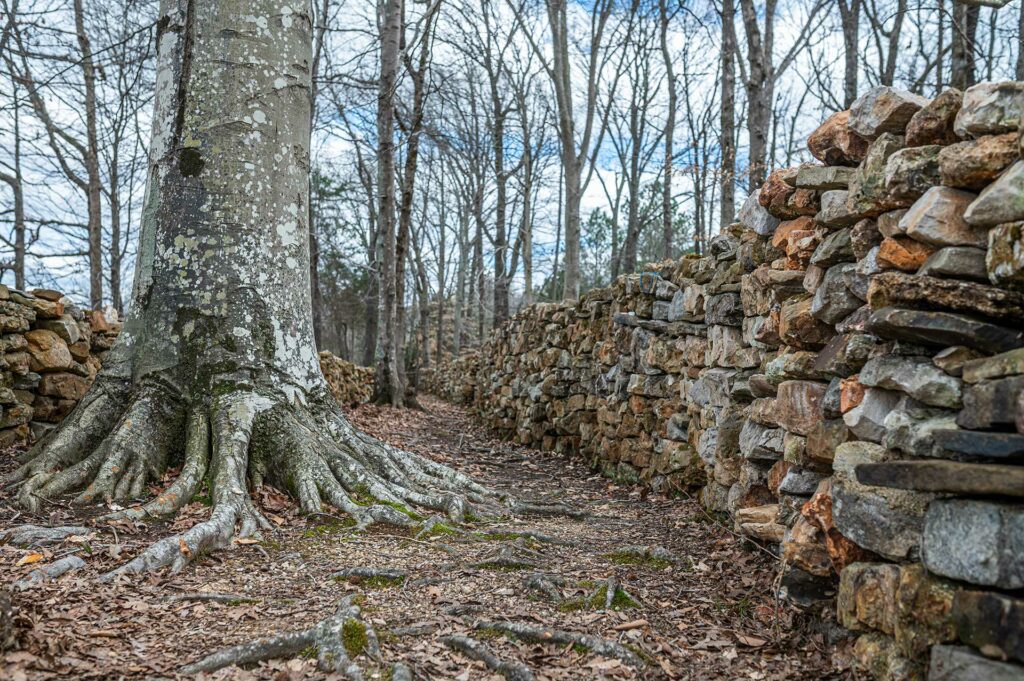 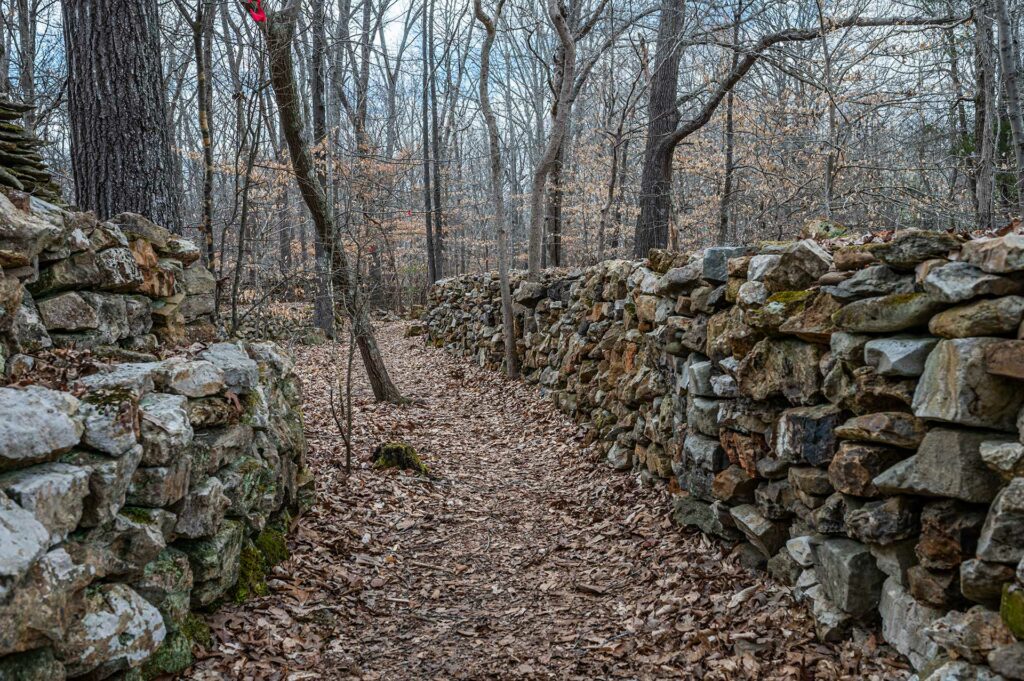 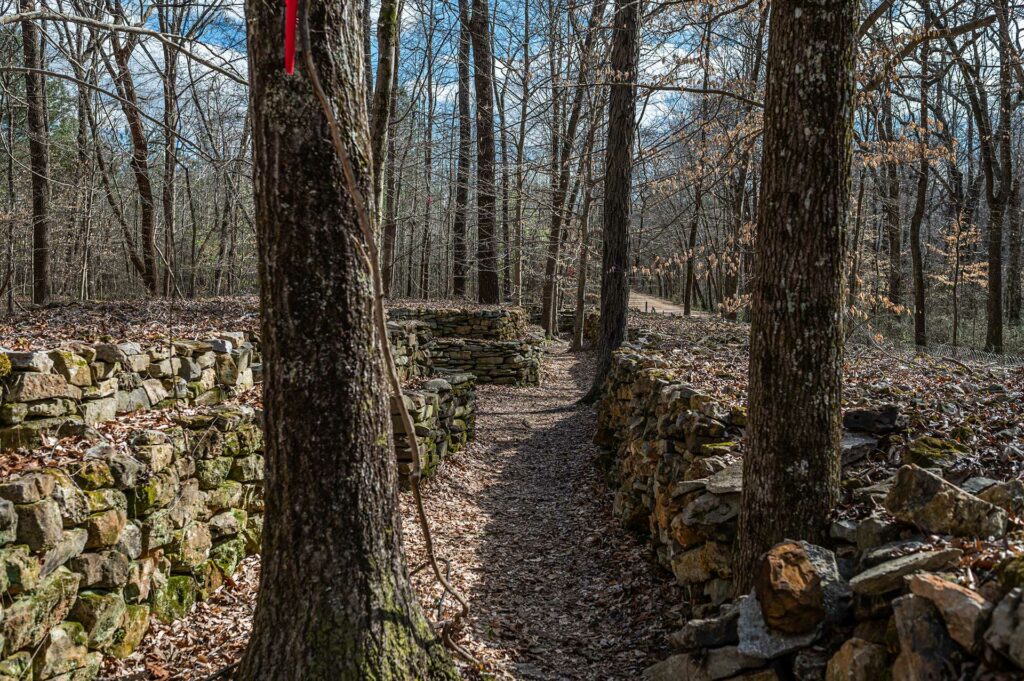 Shortly thereafter, Hendrix began a 30-year project that would result in the Wichahpi Commemorative Stone Wall — also known as Tom’s Wall or Te-lah-nay’s Wall. It winds for roughly a mile through a beautiful hardwood grove at the edge of the Natchez Trace Parkway — the Trace itself, a tribute to Native American passages. The wall contains an estimated 3,500 tons of stone, and each stone represents a step Hendrix’s ancestor took on the road to Oklahoma and back to her native Alabama. The dry-stacked limestone and sandstone edifice towers head-high in places and descends to almost waist-level in others. It measures 30 feet of solid stone — with not one shovel of backfill — at its widest point. Hidden grottos and stone courtyards with inviting stone benches line the serpentine pathway as it weaves its way under the overarching canopy, mirroring the young woman’s perilous and circuitous journey.

Hendrix called it Wichahpi, which roughly translates “like unto the stars.” He chose Wichahpi because, as one Lakota elder who visited the site reminded Hendrix, Te-lah-nay’s monument is as indescribable and unattainable as the heavens, which were created for all people. Hendrix took the teaching to heart.

"All things must pass through this world. Only the stones will remain; we honor our ancestors with stone."

The National Park Service doesn’t recognize the Wichahpi Wall as part of the Natchez Trace Parkway. You won’t find it on official websites, maps or promotional materials. But that hasn’t stopped people from flocking to it. Visitors from every state and many foreign countries have made pilgrimages to the Wichahpi Wall, to pay respect to a long-dead Yuchi woman whose story, in her lifetime, went unsung outside her own family and community.

Remarkably, when uninvited strangers started showing up with stones and other small tokens to commemorate their own life journeys, Hendrix encouraged it. He might sooner have blotted out the stars rather than deny them that simple expression of common humanity; the desire to say that everyone’s path through this life matters; to write it in stone. Some might have seen it as an intrusion into an intimate family matter; Hendrix saw it as an act of co-creation. Those wondrously mismatched stones and amulets declare, in some mysterious way, that we walk with Te-lah-nay in spirit. Amid our own fraught journeys, we reach back to her for inspiration; her steps are our steps. 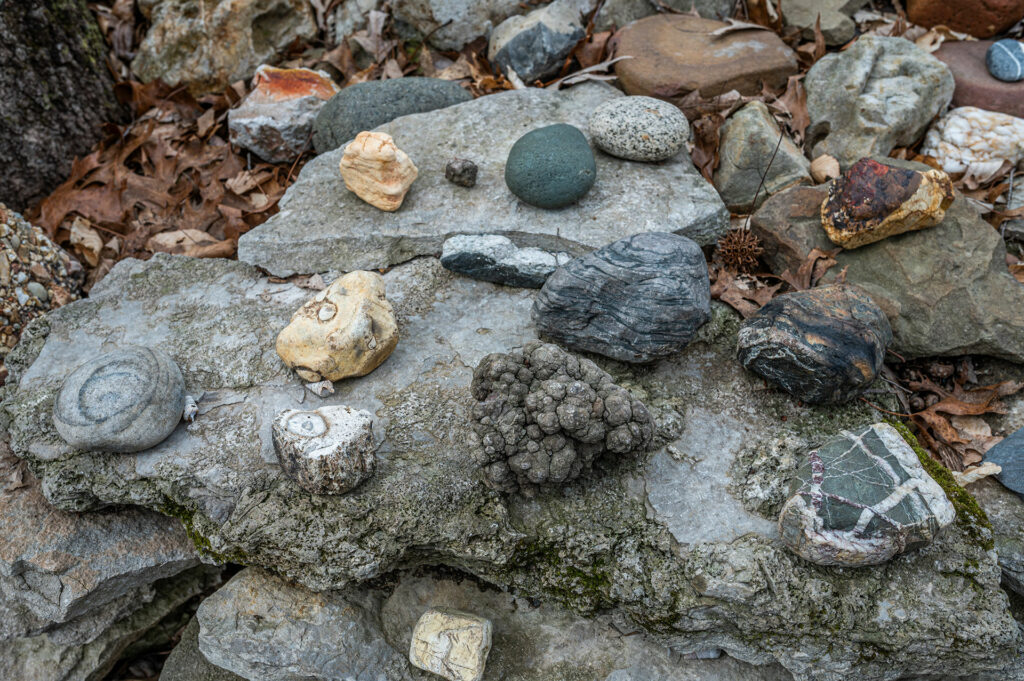 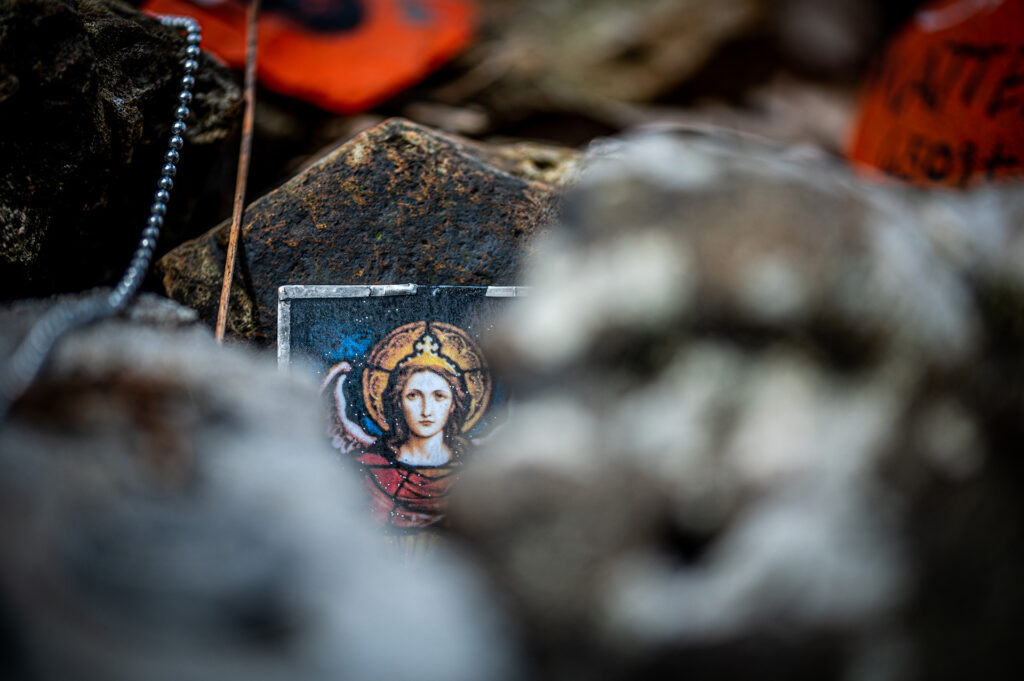 Wichahpi’s human story, the beauty of the rural landscape and its proximity to the Natchez Trace Parkway make it a natural tourism asset. Area convention and visitors’ organizations eagerly promote it as a cultural attraction. The site is universally regarded as a landmark environmental art installation and as a sacred site for many Native Americans. Though he never shied away from publicity — the whole point was to amplify Te-lah-nay’s story — Tom Hendrix was famously ambivalent about too much media attention.

“If they are meant to be here,” he sagely observed, “they will find it.”

We found it one bright and unseasonably warm winter afternoon, not long before Tom Hendrix took his own journey to join Te-lah-nay, where the waters never cease to sing. We never expected to see him there, but Mr. Hendrix met us at the entrance to the monument, cheerfully welcoming us, faithfully recounting the story, and interpreting a few highlights of the site. He invited us to meditative silence in the prayer circle specifically designed for that purpose and we humbly accepted. Afterward, we took our time walking every inch of the wall, savoring the sacrifice in each stone, imagining both odysseys: that of a brave young native woman and her aged grandson who refused to let her memory die.

Mr. Hendrix patiently fielded all of our questions and warmly invited us to come back anytime, adding that we were welcome to place a meaningful stone or object on the wall alongside the others—no questions asked. Almost five years later, when I toured the Crazy Horse Memorial in South Dakota, the guide encouraged us to make souvenirs of the pink, mica-flecked granite carved from the mountain face, and I knew immediately what I would do with mine.

Since his passing in 2017, I often find myself reflecting on the motivation for Mr. Hendrix’s lifework. In his mind, Wichahpi Wall was more pathway than barrier or enclosure. He spent more than a third of his allotted years on this earth building a monument, one stone at a time, to honor the courage of the dispossessed. The work of his hands is an enduring symbol of one vulnerable woman’s defiance in the face of a powerful nation that would muster its resources to divest her of home and hope. Every stone cries out from the earth that Te-lah-nay was victorious, and history judges the Indian Removal Act one of the most disgraceful public policies every undertaken in the name of the American people. Plan your steps and build your walls with sober introspection; history’s vigilant eye is on us yet.

Tom Hendrix’s family still lovingly maintains his work and welcomes visitors to walk the Wichahpi grounds and imbibe an incredible history that spans almost 200 years. On a recent visit, I found Tom’s son, Trace, gently guiding people into engagement with the environment, just as his father had done, allowing it to speak for itself, to work its magic on each visitor. According to Trace, visitation remains high in the wake of the pandemic and the National Park Service has expressed an interest in acquiring the site for a featured stop on the Natchez Trace Parkway. When I asked if he would ever consider selling, he quickly shook his head with a resolute, “No way.” Why, he asked, would his family entrust the guardianship of this, of all places, to a government that methodically carried out the Indian Removal Act? It’s a fair question.

I know the preservation of Wichahpi Wall is a deeply personal mission for Trace and the Hendrix family, but I’ll always be thankful that my wife and I first found our way to that lovely place while Tom Hendrix was in this world to greet us. I wish he’d been there recently to hear how I thought of his grandmother as I gazed at the defiant Lakota figure emerging, inch by inch, from the South Dakota mountainside and witnessed my piece of pink granite sparkling in the Alabama sun for himself. But I’m probably not the first to place a stone from the Black Hills at the Wichaphi Wall, and somehow, I think Mr. Hendrix must know anyway.

Shadows were growing long that first day as we said our last goodbyes. A pair of bikers pulled up across the road and Mr. Hendrix waved hospitably, motioning for them to come on over. He seemed more fatigued than when we first arrived — he was in his 80s at the time — but still showed the same youthful enthusiasm when the couple approached. As they surveyed the environment in sincere astonishment, they confided they must have driven by on the Natchez Trace a hundred times but never knew about Wichahpi Wall until that day.

“Ah, but today,” Mr. Hendrix said with a knowing smile, “today, you found your way here.”