To Carver With Love

Last week, Charles McNair brought us the story of the 50-year reunion of the Dothan High School class of 1972, the first fully integrated class in that Alabama town. This week, his friend James "Shack" Thompson brings us a remembrance of the Black high school that closed when desegregation happened.

Like flowers, children grow best when watered with love.

In the wilds of an unsophisticated jungle, it is a very rare thing to see lions and tigers playing together, but yet they played. However, in my genteel, southeastern Alabama hometown, it was impossible to witness the Dothan High Tigers play the Carver High Lions in football or any other sport due to the unrepentant “separate-but-equal” school ideology that permeated the South before integration. 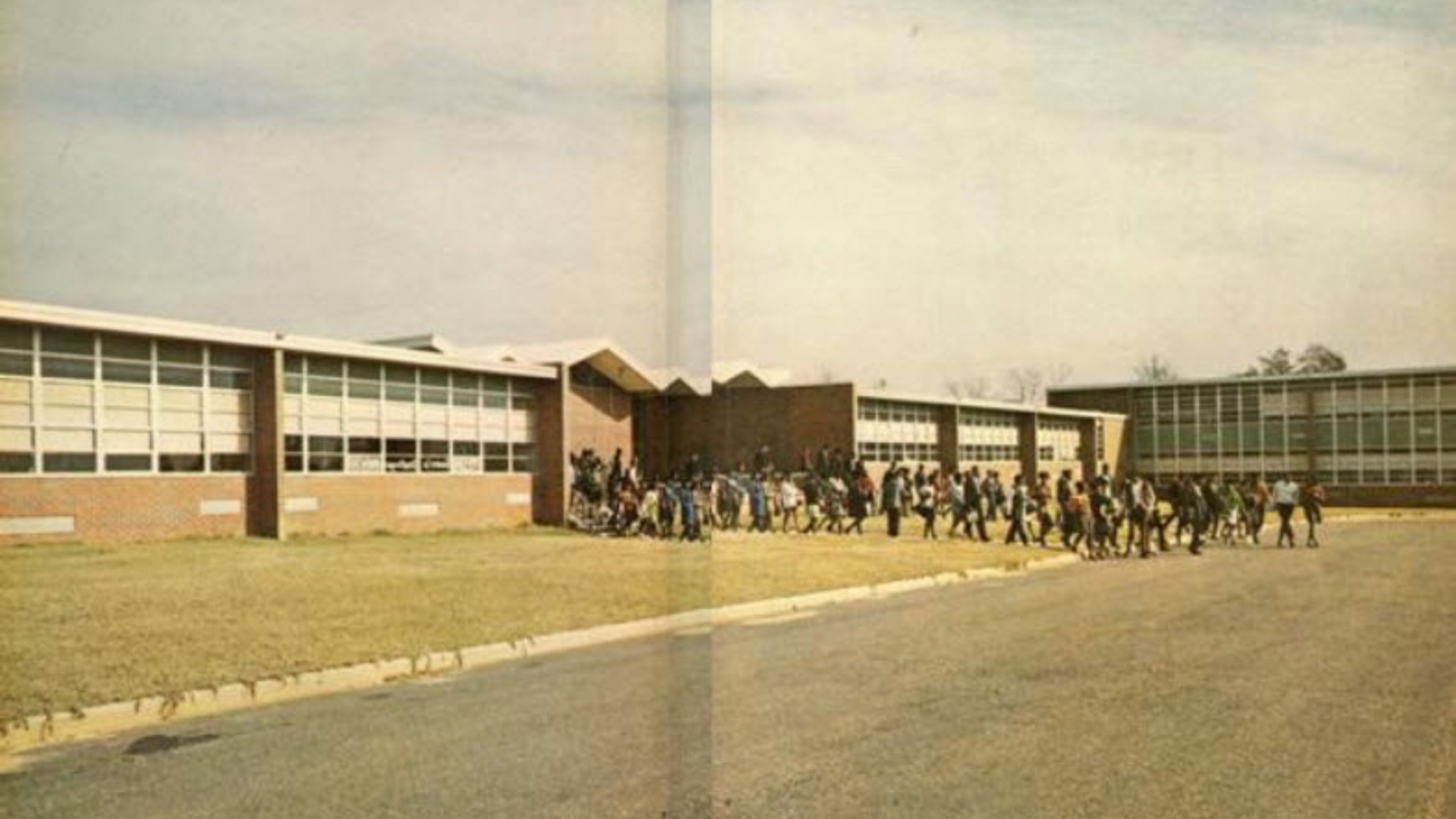 Carver High School in the 1960s. It closed when the Dothan, Alabama, schools integrated in 1969.

Fair play was thought to be separate-but-equal; however, it was always known that there was no truth in that educational misnomer. For example, students from black schools sometimes received hand-me-down school books from white schools with racial obscenities visibly scribbled on some of the pages.

Dothan's George Washington Carver High School was a segregated but self-contained public high school serving African American children from 1940 to 1968. In 1969, the students were integrated with white students at Dothan High School, and Carver High was closed forever. The high school was gone, but the history, heritage and contributions of a great school live on through its former students, teachers and their descendants. My sister, Anita Thompson, graduated from Carver in 1968, and she went on to become an extraordinary city planner and later a teacher before she passed away in 1987.

Artis Gilmore, the legendary 7'2” NBA basketball superstar, played for the Chicago Bulls, San Antonio Spurs and the Boston Celtics before he retired. In 1967, Gilmore graduated from Dothan's Carver High School where he was a 6'10” basketball sensation. Gilmore may be the most famous graduate of Carver High to date, but his skills and talents were indicative of the kinds of students that Carver High bred.

At Carver, some felt like a big fish in a small pond; yet when they got to Dothan High, they felt like a small fish in a big pond.

The renowned Dr. James A. Smith served as principal of Carver for the bulk of its existence. Dr. Smith was a resolute administrator and a caring and protective educator. He cared for his students and his school like a shepherd guarding his sheep. Under his leadership, he had a diverse teaching staff. All of his teachers were not black. Before mandated integration, there was one Caucasian teacher in Mrs. Burnelle Armstrong who taught English at Carver. Mrs. Armstrong was educated at Samford University. There was also one Asian teacher in Mrs. Kozue Armstrong, who also taught English and was educated at Tokyo Japan's Aoyama Gakuin University. Mrs. Armstrong was the daughter-in-law of Mrs. Burnelle Armstrong.

Carver High left a rich legacy and history of which to be proud. The Carver High Basketball team won the AA state championship for the 1957-58 season. The Carver High Marching Band, known as the “Marching 100,” was widely believed to be the best high school band in the state. They were frequent performers at the Dothan National Peanut Festival where blacks and whites marveled at their superb showmanship. If you ever got a chance to see the Marching 100, you were always amazed at their acrobatic athleticism and homegrown honed musicianship.

In addition to being strong in sports and music, the students at Carver were also academically strong. Carver had the Willie Kathleen Idlett Chapter of the National Honor Society, whose credo was “Leadership, Scholarship, Character and Service.” There was the Frederick D. Patterson Chapter of Future Teachers organized in 1953 and an affiliate of state and national education associations. Carver had the Bi-Phy-Chem Club, which was a science club that represented students of biology, physics and Chemistry. There was the Future Business Leaders of America Club, the International Thespian Society, the Choral Program, the Art Club, the Math and Algebra Club and the Student Council. Carver had a Vocational Trade and Industrial Educational component that focused on careers like auto mechanics, brick foundation masonry and cosmetology.  At their graduation ceremony, Principal Smith charged the class of 1969 to build their fortune according to their chosen theme: “Education – the Blueprint to Progress.”

When Carver was closed and the students were forced to attend Dothan High School, the separate-but-equal doctrine began to break down. The band members of the excellent Marching 100 were not seen as equals to the band at Dothan High. Their music styles and marching formations were completely different and based on their respective cultures and environments. It was assumed that the Carver students could not read music and therefore were subpar. The Carver band members served as sort of a “B” team band to Dothan High's band: They had to audition for their spots in the Dothan High band. The Carver students greatly resented that assumption, and that resentment has lingered for decades. The former members of the Carver National Honor Society and other clubs felt shunned or not accepted as they had been at Carver. It was a bitter pill to swallow for seniors from Carver that first year of integration, and that may help to explain some of the blatant disconnect among the students who did not feel the need to attend class reunions for Dothan High.

Many students from Carver felt like they received a raw deal after integration and were unable to reap any benefits from it at all. Although 85 percent of Carver students did attend college and had successful professional careers, there were others who did not and could not. At Carver, some felt like a big fish in a small pond; yet when they got to Dothan High, they felt like a small fish in a big pond. Their world was far different than what they had previously perceived, and some suffered from paranoia. Some were paralyzed by various life-changing racial phobias that were more real than imagined. And the prospect of trying to get ahead in life by serving in the military was not a good prospect for some at that time because the Vietnam War would await enlistees. Left without other career options, some students volunteered for service and some were drafted. Some came home. Some didn't. But the ones who came home were never the same … then and now.

The 1969 Carver High School yearbook was the only one ever produced by the school. It was named GEWACA, which was an acronym that stood for the name of the world-renowned and esteemed slave-turned-scientist, Dr. George Washington Carver of Tuskegee, Alabama. The prophetic foreword in the book reads: “The GEWACA is Carver's first yearbook. It is about you — the good and bad moments you have shared with friends. It is hoped by the GEWACA staff that our first yearbook will serve as a nostalgic treasure of memorable events of Carver at work and play. To those of other times and places, we offer the GEWACA as a history of our past and an indication of our future. A future in which we hope to make our mark on society ... and, departing, leave behind us footprints on the sands of time.”

The words to the “Carver High Alma Mater,” lovingly written by librarian Mrs. Emma N. Walton, offer another haunting tribute to a school that could never reach its full potential because of the fate of integration and progress.

Dear Carver High, Mother of mine
We come to you with hearts sublime,
Our homage to lay at your feet,
For cares you've tendered so complete,
We love thy wall and campus green,
Where e'er we go your stars are seen,
Your name inspires, your colors fly,
Like herald banners in the sky.

Chorus:
O Carver High, dear Carver High
Voices we raise from earth to sky
To tell thy virtues we proclaim
A fond recall of Carver's name.

Symbolic with your name is one,
Whose fame will last ’til day is done
Like His whose models were the clay,
May all your virtues reign for aye,
Benevolent, protecting, true,
Our hearts are thine what’er we do,
Through ages and eternity
With reverent voice we'll sing of thee.

Help us dear Father as we pray
Keep our dear school from earth's decay
Long may her meteors blaze with light
To steer the path on darkest night,
Grant wisdom, power and grace divine,
To all who seek a higher climb
Within these walls of ageless dreams,
For guidance from your radiant beams.

As a ninth grader in 1969, I was destined and eager to attend Carver like my sister Anita; however, our schools got abruptly integrated, and at the last minute my dreams of Carver were short-circuited. Although I was never part of the historic Carver High, I did manage to be a part of another kind of history in that I was a part of the class of 1972, the first graduating class of Dothan High that had three full years of integration. For me, integration forced me to compete and become better. I carried the credo of Carver High in my heart and tried to live the words of Carver’s alma mater. Many of the teachers at Lake Street Junior High School told me that I was not as smart as my sister, and that helped encourage me to do better at Dothan High School. It was true that Anita was the smartest sibling in my family, and I could not hold a candle to her academic record or scholastic achievements. At Dothan High, I forged my own path but carried myself like I was a transfer student from Carver High. I knew I was different. But I also felt that I wanted to make a difference.

The smell of fear filled my nostrils as I first walked through the halls of the human jungle at Dothan High. With the heart of a lion and the eye of a tiger, I realized I was now a half-breed — a LIGER. This was the first time that lions and tigers interacted together on a sophisticated level. Integration had unwittingly created a new breed of hybrid students from Carver now ready to play on a future field that would be more level than before. We slowly moved away from separate-but-equal toward a competitive world that focused on the survival of the fittest. Carver students had proven that they were fit and able to compete on any world stage, just like Artis Gilmore had demonstrated before.

“To Carver With Love” is an apt title for my essay because I firmly believe that, like flowers, children grow best when watered with love. Some may wonder who would have won the game between the Carver Lions and the Dothan Tigers had they been allowed to play. The answer is simple: We all would have won! I hope this essay will help heal some wounds of the past and help us all to understand that all of our actions in life are like footprints on the sands of time. We have to be responsible for our own well-being and ensure that we also look out for others who may be struggling.

“Some men see things as they are and say why. I dream things that never were and say why not.”
— Robert Francis Kennedy

5 thoughts on “To Carver With Love”