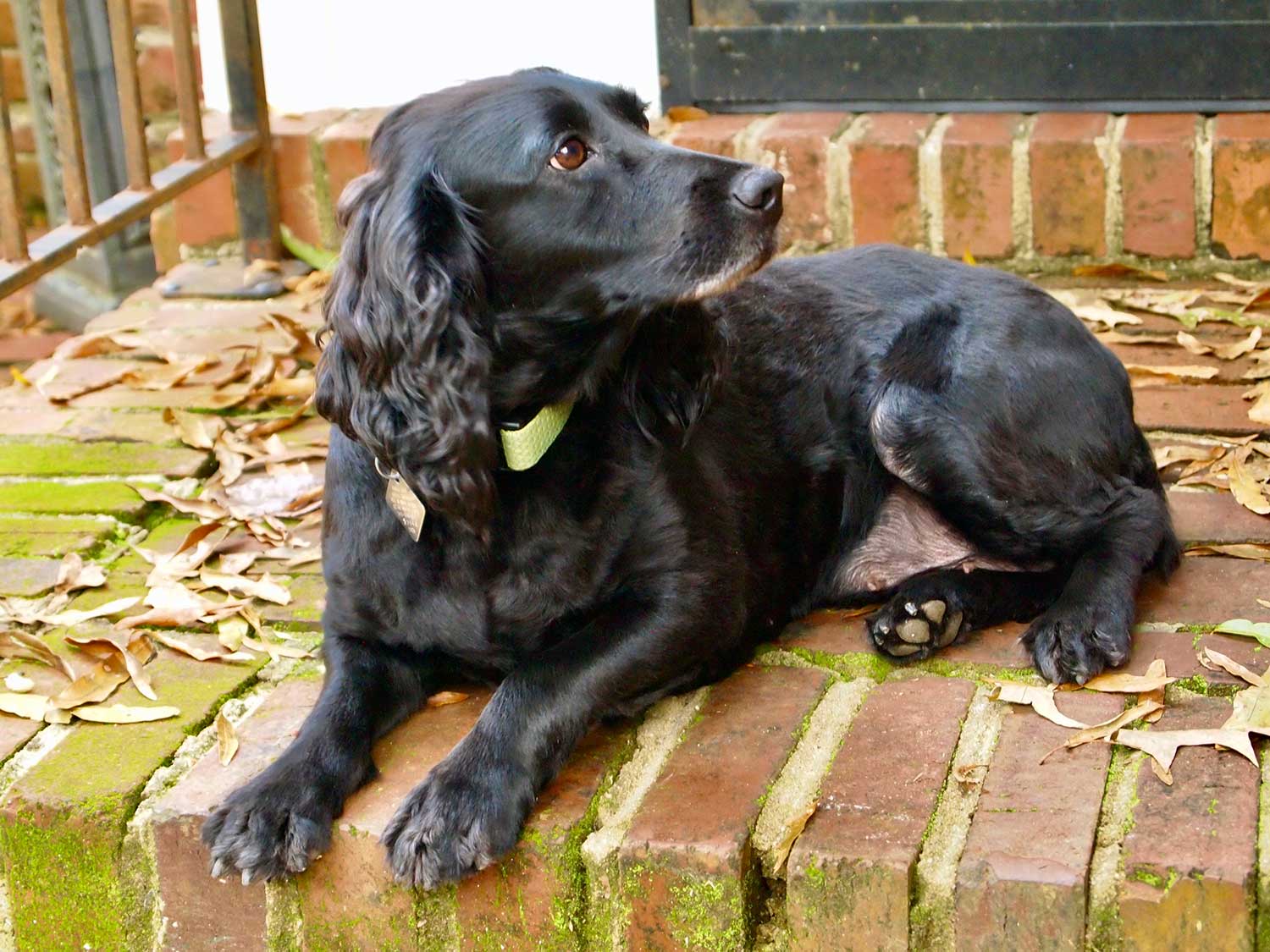 Richard Murff admits to being perhaps the only Southerner ever to own two hunting dogs, neither of which would hunt.

“So,” Dad clarified – he wasn’t being sarcastic, just making sure that he’d heard me correctly — “this is the second gundog that you’ve owned that won’t hunt?” He was kind enough not to point out that I’d done this to myself on purpose.

The wife and I were driving to Texas the next day to pick-up a 5-year-old English cocker spaniel, a hunt training washout. Gun-shy but brainy, she’d spent the last four years as a breeder for a high-end hunting lodge. The intelligence issue gave me pause, and no one wants a dog that can beat them in chess. Dad’s confusion was understandable as well. We weren’t a dog family, and while I hunt, I’m not a dog person. I’ve never had anything against dogs, you understand; they occupy the same spot as fine cigars: I love the idea of them more than I love the reality. The irony is that my family lived on a farm when I was born and have remained, for lack of a better term, almost a farmer ever since.

My wife, the dog person, grew up in town. When we were dating, maybe six months in, I watched Maggie nuzzle her aging yellow lab, Katy, and thought, “Murff, if you hitch your star to this delightful wagon, you’re never going to not have a dog.” 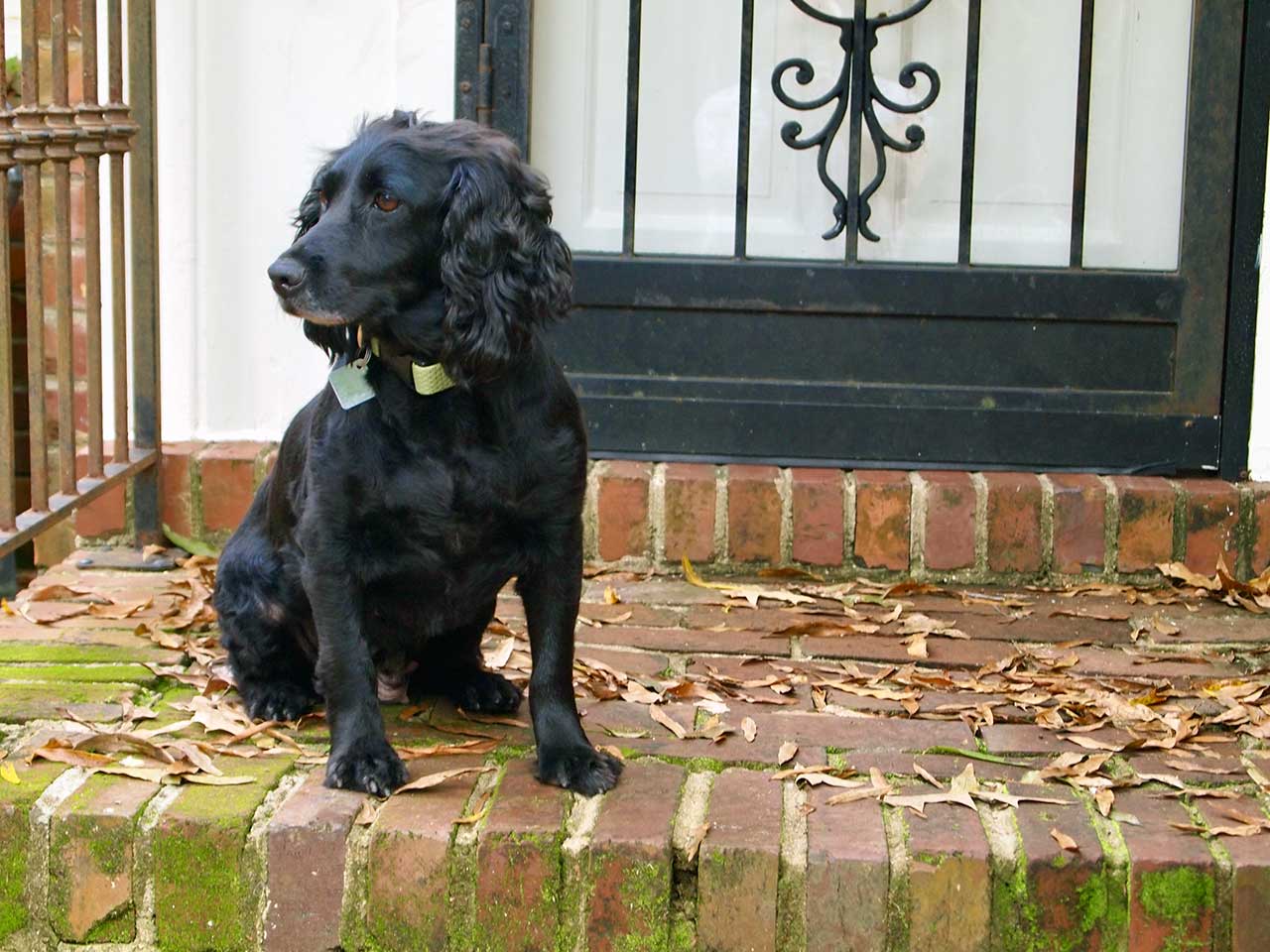 As childhood pets do, Katy passed on. We got married late one February and five weeks later I got a call from my new bride sweetly asking about a rescue dog. Well, it was phrased as an ask, but I was pretty sure this was happening no matter what I said. The story she told me involved an English setter puppy being found galumphing along the side of the road in South Carolina and ending, somehow, with us picking up a puppy tomorrow after work — on April Fool’s Day. What Clemmie lacked in dog smarts she made up for in affection. Which is to say she was a very charming blockhead. Setters can be like that. Clemmie was a good dog right up to that day, almost a dozen years later, when she wound down and went to go play with Katy.

A year passed and then some, as the list of dog names on Maggie’s phone started to tax our data plan. Another dog was coming. I just didn’t know when. It would be an ask – we’re a polite pair – but it wouldn’t be a question. I don’t know how the connection was made, but suspect that she was guided by the invisible paws of Katy and Clemmie to Field to Family Dogs, a gundog rescue operating on a national scale. Field to Family was founded in 2019 by the determined and infinitely likable 28-year-old named Meagan Cook. She was the fishing manager at Orvis in Austin, Texas, which gave her access to the corporate-endorsed wing-shooting lodges around the country. They keep dogs, good dogs. Arguably the best. In any bloodline, however, you are going to get a few who don’t quite fit in with the pack, who aren’t cut out for the job for which their tribe are destined. That I get. I understand investment banking and certainly look the part, but I lack the temperament to be really good at it.

"I went into this marriage knowing Maggie was a dog gal — but not that I’d hitched up to a clan with family dog names. There have been two Gruesomes; for the sake of clarity the second went by Gru Two." 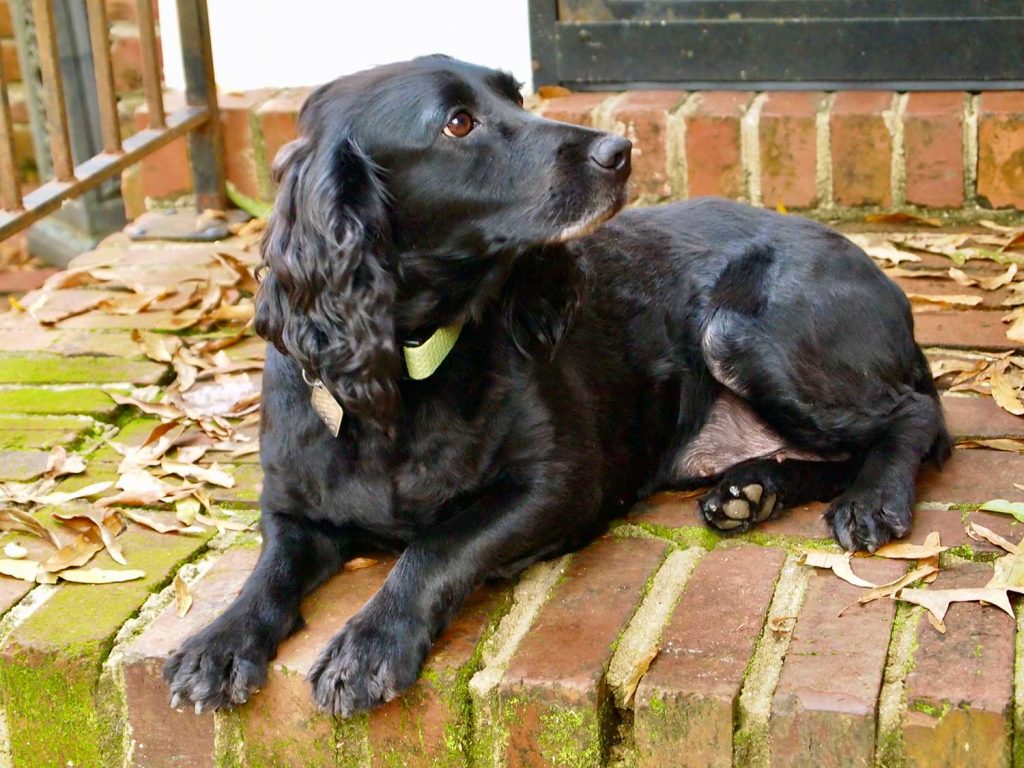 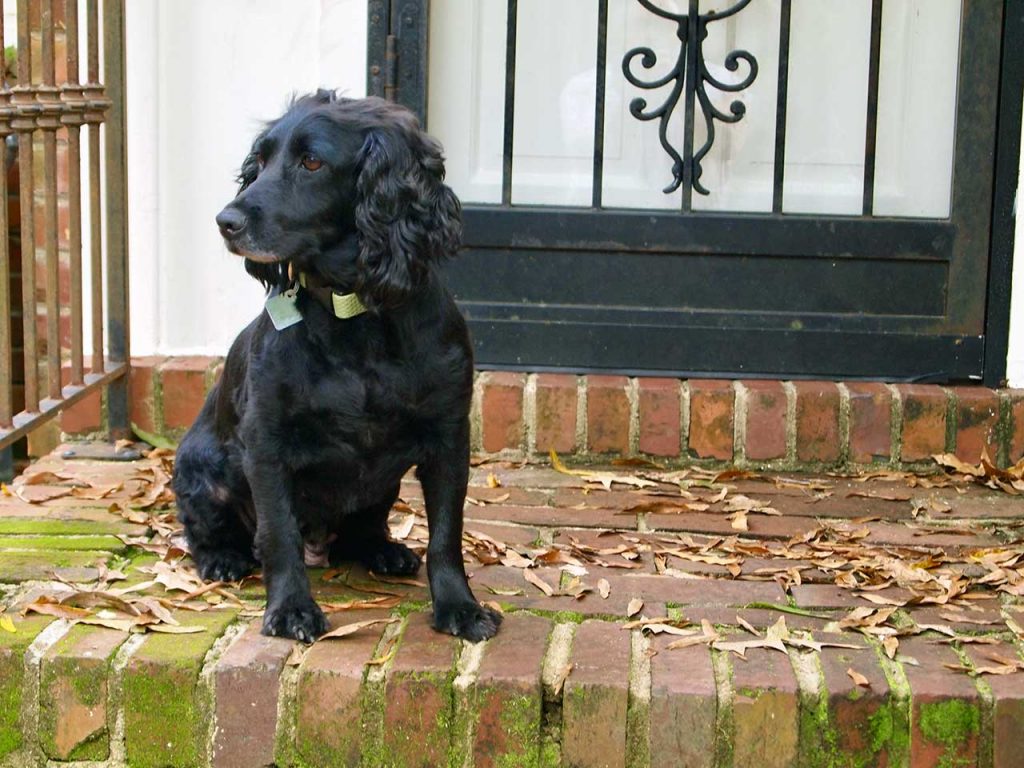 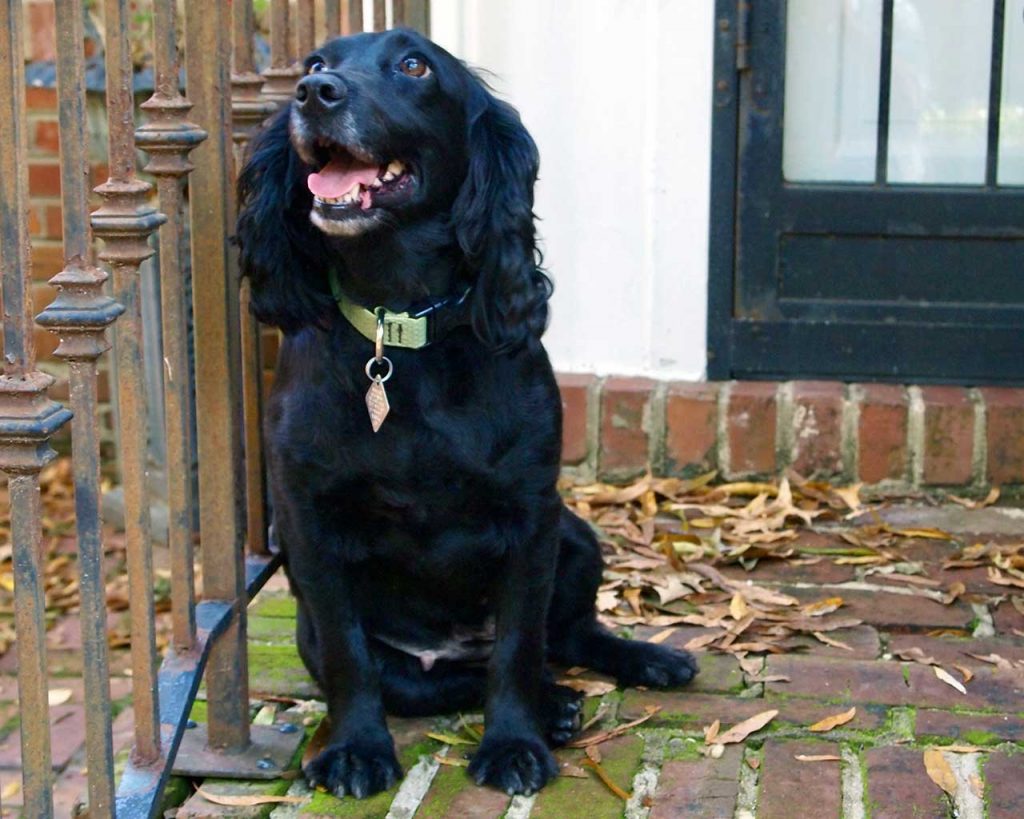 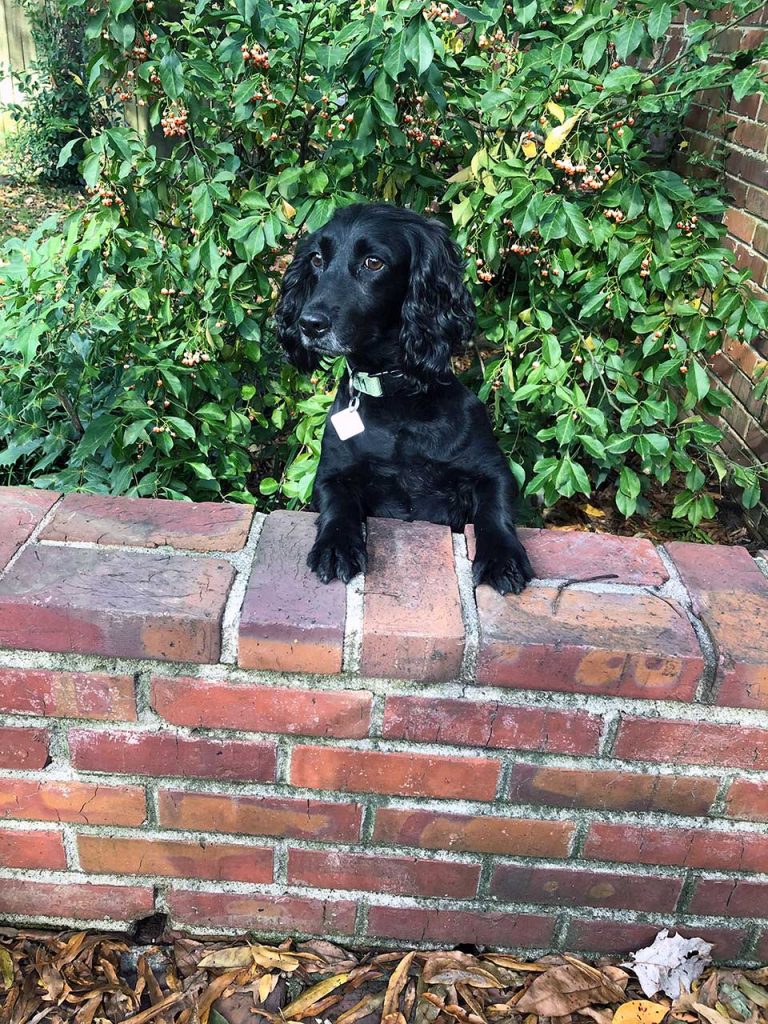 So Meagan started Field to Family Dogs, which has “re-homed” some 52 gundogs who’ve retired, been injured or just weren’t suited for the job.
“I thrive on how these dogs adapt – the joy in them,” Meagan told me. While she’s now part time at Orvis, Field to Family is 501c3 non-profit official, and her network of lodge operators is starting to operate at full bore. “A dog will just fall into my lap,” she told me, “and then, two weeks later…”

She and Maggie are chatting and texting, and I’m being shown videos of a five-year-old English cocker spaniel called Peaches, who was not on that three-gigabyte list of dog names Maggie was keeping. I started to ask about the dog’s name, but stopped short. The look on Maggie’s face suggested that she was about to sweetly brain me with the nearest table lamp. This wasn’t hard-headedness: When Maggie’s grandmother had been sick, in the foothills of dementia, her grandfather had given her a West Highland terrier to lift her spirits. Granny lifted the puppy, wrong way round, took a look at the pup’s rear-end and said, “Oh… Peaches.”
I went into this marriage knowing Maggie was a dog gal — but not that I’d hitched up to a clan with family dog names. There have been two Gruesomes; for the sake of clarity the second went by Gru Two.

Meagan had warned us that Peaches was both gushy and stubborn, and even a little quirky. After we’d returned to Memphis, she admitted that maybe she was more than a little quirky. Now I’ve lived my entire life in the South, so has Maggie, so has Meagan: We all speak euphemism. Meagan was being entirely honest about this hard-headed weirdo of a dog, but honest in a way that allowed us to entirely ignore it if so inclined.

We were so inclined. So Peaches arrived at a happy, cushy retirement and promptly stared at us for a week. Beginnings, even retirements, are an adjustment. There is hope, but at a certain age, you eyeball hope a little warily. Peaches ate so little that Maggie and Meagan were in contact almost daily that first week. Gundogs aren’t leash trained so our jaunts took the form of a tug-of-war. I chicken-wired the gap under the fence only to realize that this dog who’d spent her entire life in outdoor kennels suddenly couldn’t abide the backyard. Before we pulled Clemmie’s bed out of the attic, she stuck herself in front of my chair. Maggie reckoned she was bonding, but it looked more like she was passive-aggressively testing how far she could annoy me before I did something about it.

The manifestation of her stubbornness actually had physical weight to it. When she plants, and that’s the only verb that captures it, her 30 pounds is heavier than Clemmie’s 60. The physics baffle me. Occasionally, I’d call and occasionally she’d come, but in retrospect I’m not sure that the two were actually related: like seeing a solar flare and then Ole Miss beats Bama.

There are joys with a gun-dog washout though, as she’s a beautiful dog, well-trained, and not a puppy (and all that entails). She didn’t chew, no accidents, no barking: She just watched. It took a little time to sort out that Peaches, coming from a world of well-trained gun-dogs in wing-shooting operations (even if bird-dogging wasn’t her forte) that we were the weirdos. Well, she wouldn’t be wrong. So, we three stared at each other for a week.

Which was about as long as it took for me to give up. Not to concede, but to quit trying. And like that, so did she. The four-mile tug-of-war morphed into the pleasant, if lively, jaunt. She started eating with gusto. I quit calling her and suddenly she was at my side, tail wagging in an inky black blur. The backyard became a magical place in which to zoom about and make yourself obvious among squirrels and birds.

Most Americans love dogs, even if from a distance. As Flannery O’Conner said, Southerners also love their misfits. And there is no reason why a dog that won’t hunt can’t find another job in life. I won’t go so far as to say that we were menaced by the squirrels in the backyard, but they know there is a new sheriff in town and she’s called Peaches. And that’s a lot to live up to. It’s an illustrious name, established by a storied Westie who heroically mooned my wife’s grandmother.