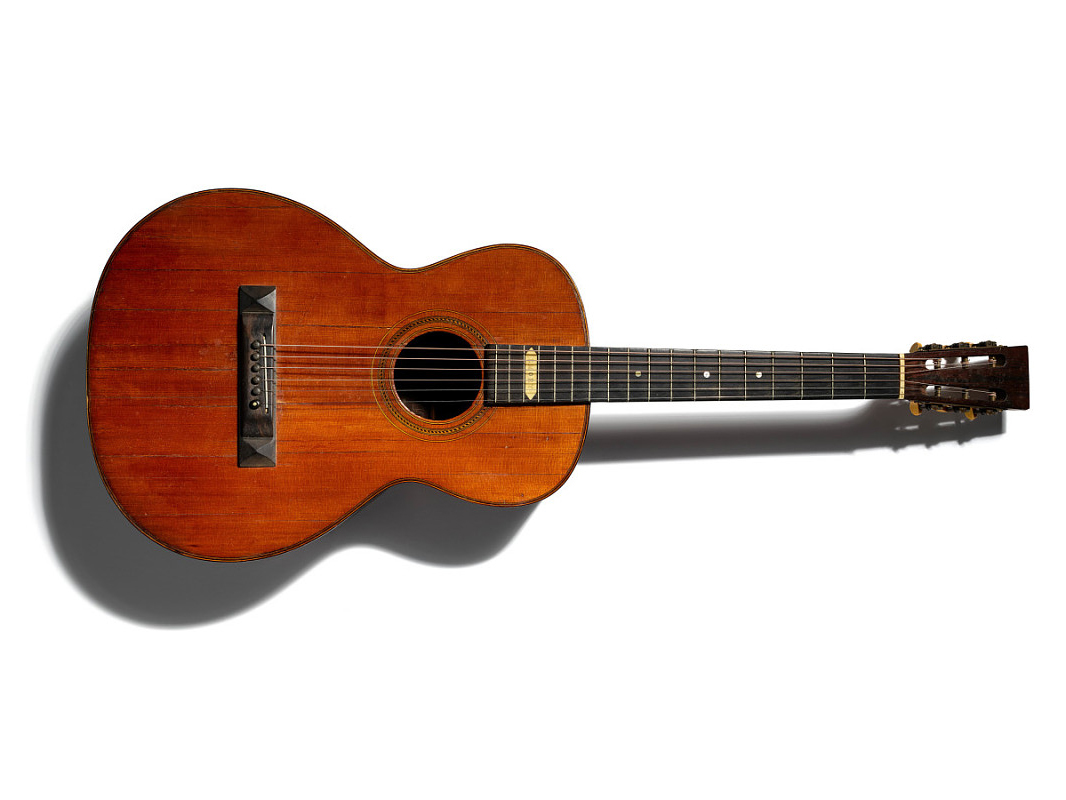 The guitar was pulled from a white cabinet that looked like all the other white cabinets we saw that morning.

The guitar was pulled from a white cabinet that looked like all the other white cabinets we saw that morning.

Row upon row of industrial-strength storage, coded with numbers that meant nothing to us but everything to the museum’s white-gloved curator, each holding a trove of treasured piece of American cultural history. We saw the Fonz’s famous leather jacket, a baseball bearing the signature of the Babe, Rick Flair’s feathers and George Foreman’s trunks, Dr. Jones’s fedora and Mister Spock’s ears.

But it was the instrument room where the curator thought we might be most interested. After all, it was a rock and roll band he was guiding on a private tour through the deepest bowels of the Smithsonian Museum of American History. He showed us one of Prince’s Symbol-shaped guitars, Duke Ellington’s travel bag, and Dizzy Gillespie’s upturned trumpet. And then he pulled out the Emory and strummed a gentle chord.

The sound was no more or less spectacular than any other vintage acoustic I’ve ever handled; not the 1920s Gibson I was allowed to use to make a record nor the 1930s Martin I played at instrument emporium-cum-makeshift museum, Chicago Music Exchange. The wood was aged, a dark amber color due to the decades of the oil and dirt and sweat of human hands working into its pores and the instrument looked more like the side of an old ship than a guitar. There were small, horizontal cracks running along the seams of the guitar’s top and tiny chips taken out of the edges of the soundhole. The tuners, no doubt once brilliant white, were a rich and dark yellow. Even the guitar’s brand name beveled into the guitar’s sixteenth fret, showed signs of a century of age. And though the ‘E,’ ‘M,’ ‘R,’ and ‘Y’ were worn from the stressors of its steel strings being pressed into it, the ‘O,’ wedged safely between the third and fourth strings, was as dark and as brilliant as perhaps the day it was made.

Structurally and historically, this Emory, made sometime in the late nineteenth or early twentieth century, was just like any other century-old guitar. But intrinsically, the guitar was anything but normal.

It was the guitar Mississippi John Hurt played at the 1963 Newport Folk Festival, a performance many historians believe helped usher in an era of appreciation and reverence for traditional Southern blues music. Which is why, of the many guitars Hurt played over the course of his life, this one sits in a locked cabinet in a locked room in a locked hallway, a revered artifact of American cultural history.

Hurt, who was born 130 years ago this month, spent most of his life as a sharecropper and farmhand in Mississippi. He taught himself how to play guitar at the age of nine and honed his talent playing at local dances. In 1928, Hurt recorded his first singles for the OKeh label after being recommended by fiddle player Willie Narmour, who won the recording sessions in a fiddle contest. The singles, recorded in Memphis and New York City, were commercial failures, resulting in Hurt returning to farmwork in Mississippi, where he would remain until the legendary American musicologist Dick Spottswood, in 1963, came across a copy of Hurt’s final OKeh single, “Avalon Blues.”

Hurt’s music had found some interest a decade prior, when two of his OKeh singles—“Frankie” and “Spike Driver Blues”—were included in the Anthology of American Folk Music, a 1952 release culled from the personal collection of the artist and experimental filmmaker Harry Smith. However, attempts to locate Hurt proved unsuccessful. A decade later, Spottswood asked a musician friend named Tom Hoskins, who was traveling near Avalon, Mississippi, if he might inquire about Hurt. Hoskins found Hurt’s cabin and, after some persuasion, convinced the bluesman to play for him, that he might confirm Hurt’s identity.

After some urging from Hoskins, Hurt moved from his lifelong home to Washington D.C., intent on trying once again to find a broader audience for his music. Later that year, Hurt would play at the Newport Folk Festival, using an Emory guitar that, at the time, was at least six decades old. His performance coincided perfectly with the burgeoning folk revival across America, allowing Hurt to perform around America, to cut three records with the Vanguard label, and even appear on "The Tonight Show" with Johnny Carson.

His late-life career was cut all too short, however, when Hurt died in Grenada, Mississippi, just twenty miles away from his lifelong home in November 1966. And though he only spent four short years in the spotlight, Mississippi John Hurt’s impact on American music is considered so important, it has been preserved in the Library of Congress. And under lock and key is a guitar he once played, its cracked amber wood so much like any other century old guitar, but its story so not.