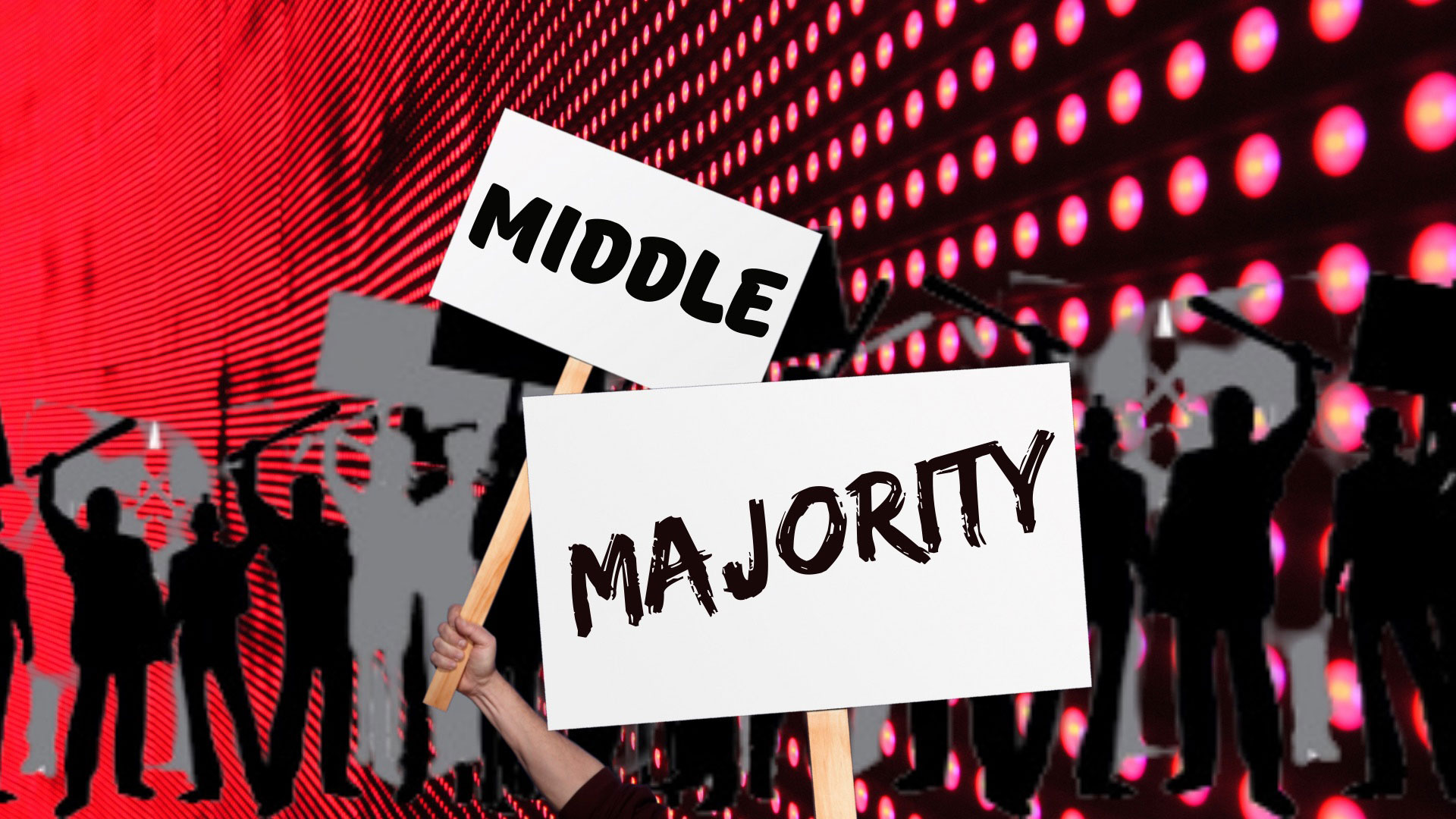 There Is a Middle Majority, and It’s Growing

From his perch in the mountains of Northeast Alabama, Stephen Smith sees hope for people who find themselves in the middle of today’s political debate.

By Stephen V. Smith with illustration by Stacy Reece

Back in 2012, I was visiting with a client in a rural Appalachian community. As I settled in for lunch at a local meat and three, with several folks from their office, the conversation turned to the presidential debate that had aired the night before between Obama and Romney. When I mentioned that I had watched it from my hotel room, a lovely lady with a friendly smile spoke up and asked, “On CNN or Fox?” I replied, “ABC, actually,” and she didn’t know what to do with that except laugh a little. Why? Because I had been given a quick litmus test, and my A or B answer would have given her all she needed to know about me. In her mind (and granted, in the minds of many at that table) my preference for a network would have indicated my preference for a party platform, and therefore my adherence to a philosophy.

“Are you one of us, or one of them?” was the implied question.

While that mindset has certainly not dissipated, I continue to see a growing weariness of such a narrow mentality. Numerous people have reached out to me, privately, this year to say they appreciated the views I’ve shared. They say it’s refreshing to see someone reason out the issues instead of reposting Trump memes and Biden memes, declaring the end of society as we know it, blasting everything about the left or the right, Republicans or Democrats. They’ve watched as people — good people, thinking people — came at me for opinions I expressed (especially in the wake of the January 6 Capitol siege) that left them obviously confused because they couldn’t drop me cleanly into one bucket or the other. This can best be summed up by a phone call I received one morning from a longtime friend who said, “Stephen, do you have a minute? I just need to talk with someone who hasn’t lost their mind.” We shared a laugh, then lamented about the folks in our own community who were posting the most awful stuff on Facebook, with words that ran counter to the character of the people as we knew them in real life.

I believe this weariness will only accelerate, as people realize that the narrative of the fringe — again, on both ends of the spectrum — is near-sighted, immature, and counterproductive. And dangerous.

he events of January 6 in our nation’s capital were a wake-up call for many. In fact, I believe that day was a watershed moment that will expand what I like to think of as a clear-headed Middle Majority. We’re a sensible lot, and we’re growing.

“Stephen, do you have a minute? I just need to talk with someone who hasn’t lost their mind.”

Some folks believe we are past the point of reconciling the divisions in our nation. I choose not to believe that. I believe there are more of us who understand that neither side has all the answers, that there are good policies and bad policies in both parties, that there are common-sense and dangerous ideologies in both parties. And I predict this trend will continue as people increasingly realize that the danger lies in the fringe, and that the litmus test of “are you one of us or one of them” is not the best path toward a better society.

Stephen V. Smith is a writer, entrepreneur, and advocate for rural development who looks forward to introducing his new grandson to old-timey music, fried bologna sandwiches, and the mountains and streams of his native Northeast Alabama.