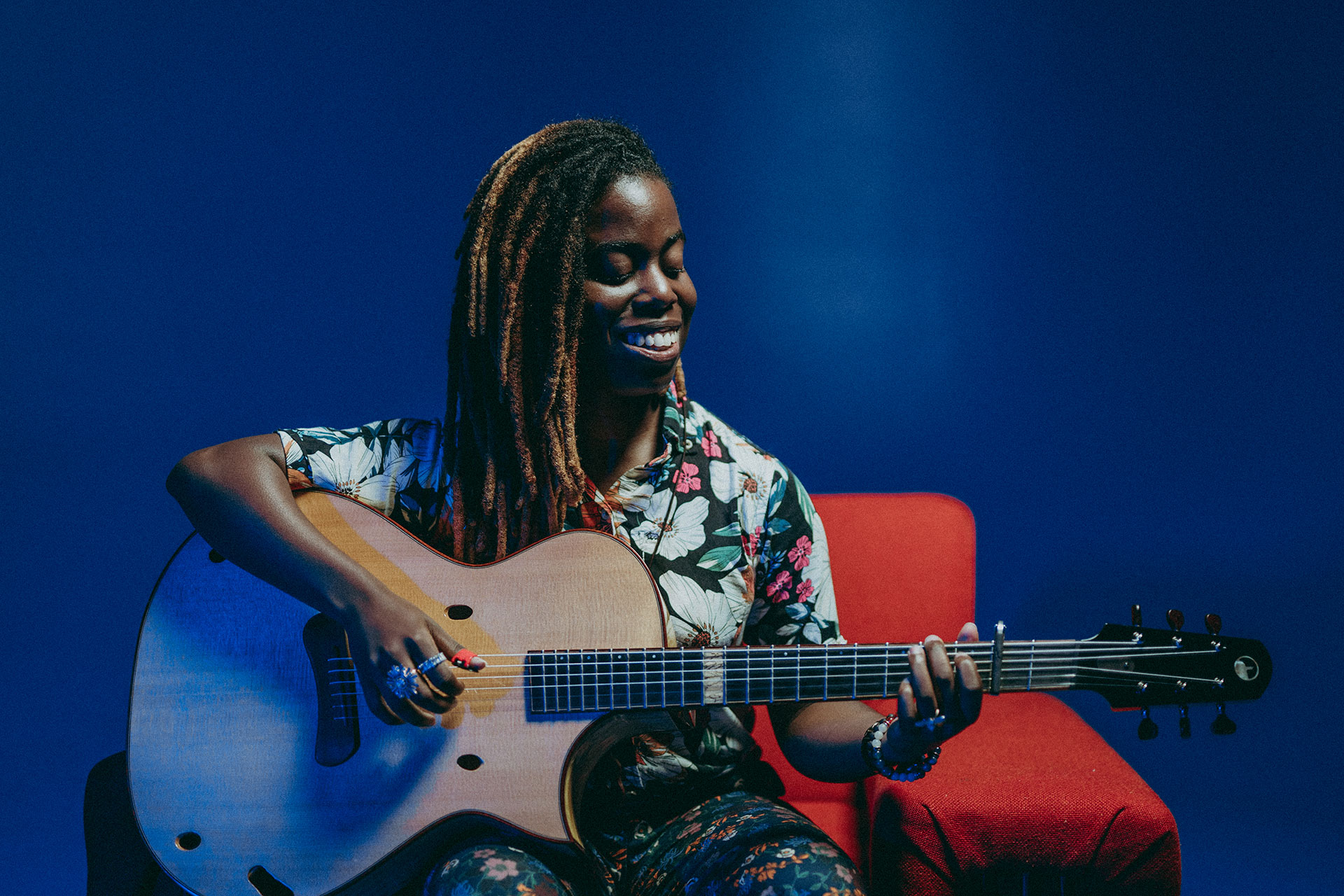 Yasmin Williams' amazing guitar techniques have created a new genre that critics (well, at least one critic, ours) is calling shimmer

By Rob Rushin-Knopf with photos by Zach Pigg

Neither the algorithm machines nor any of the major or minor music publications (or any of their major or minor critics) recognizes one of my favorite music genres. But it spans centuries and cultures, is as universal as breathing and as idiosyncratically unique as your beloved’s whispered ahhhhh.

I call it Shimmer.

Shimmer is as unmistakable as the sunrise. Patience, resonance, and the cultivation of atmospheric beauty characterize it. Call into your mind’s ear the soar of a cathedral choir, a wash of gongs and bells, the susurration of a river, the infinite echo of a wild animal’s howling bouncing off canyon walls. Shimmer is wind across a crystalline lake, or the waves of heat vibrating on a desert landscape.

No artist describes their music by that tag, but you have all heard some Shimmer. Brian Eno’s ambient adventures. The “new classical” of Icelandic composer Anna Thorvoldsdottir. Gyoto Monks or waves of Tibetan bells. David Hykes Harmonic Choir or Rachmaninoff’s Vespers. The lush harmonies and rich production of classic pop recordings like the Beach Boys’ Pet Sounds and David Crosby’s If Only I Could Remember My Name.

A rising incarnation of Shimmer is Yasmin Williams, a young guitarist from Virginia currently turning heads as one of the freshest voices on the old wire-and-wood to come along in a while. I caught up with Yasmin by phone recently as her marathon spring tour was just underway. She will be up and down the East Coast, then on to the Midwest and West Coast before jetting to Europe for much of the summer. (Full tour details here.)

Yasmin’s otherworldly technique includes flipping the guitar from “normal” position to lap tapping in mid-song, adding percussion with her tap shoes, or floating another voice on a kalimba affixed to her guitar. But technique does not always equate to heartfelt music. In this, Yasmin Williams is the real deal and one of my must-see performers at this year’s upcoming Big Ears Festival. Given the talent on tap in Knoxville this year, I can offer no stronger endorsement. (More on this massive hoolie in coming weeks.)

Interviews are often slow torment. Not Yasmin. Like her music, she is bright and open. Even better: She knows where she comes from and, while not foolish enough to predict the future, has a good sense of how to get where she is going. The confidence that helped her gain renown in the mostly-white-boys world of guitar derring-do rings like a gong.

“I guess my definition of 'influence' is a bit odd. When I say I’m influenced by something, nine times out of 10, it’s not going to come through musically. It’s more of a mental thing." 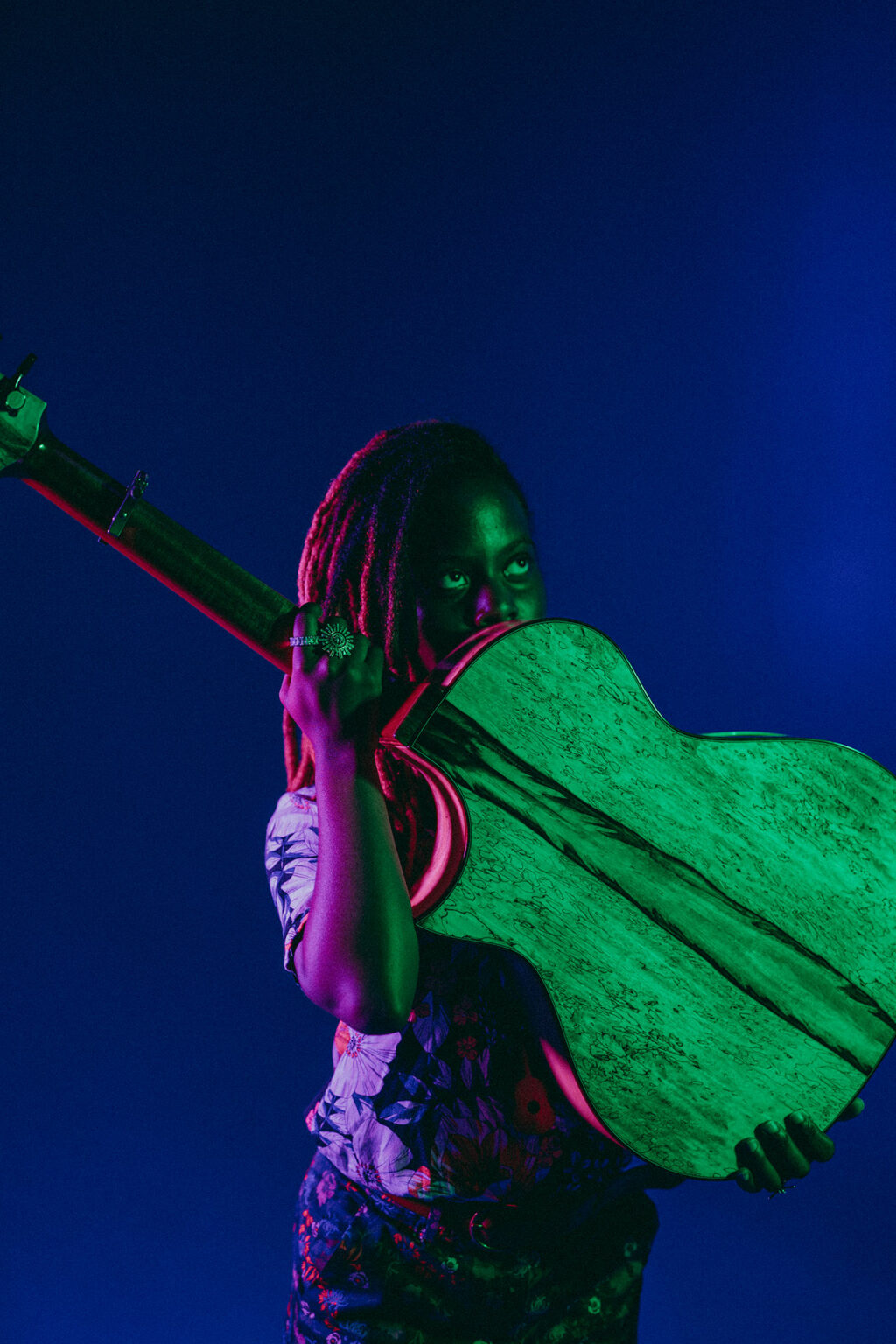 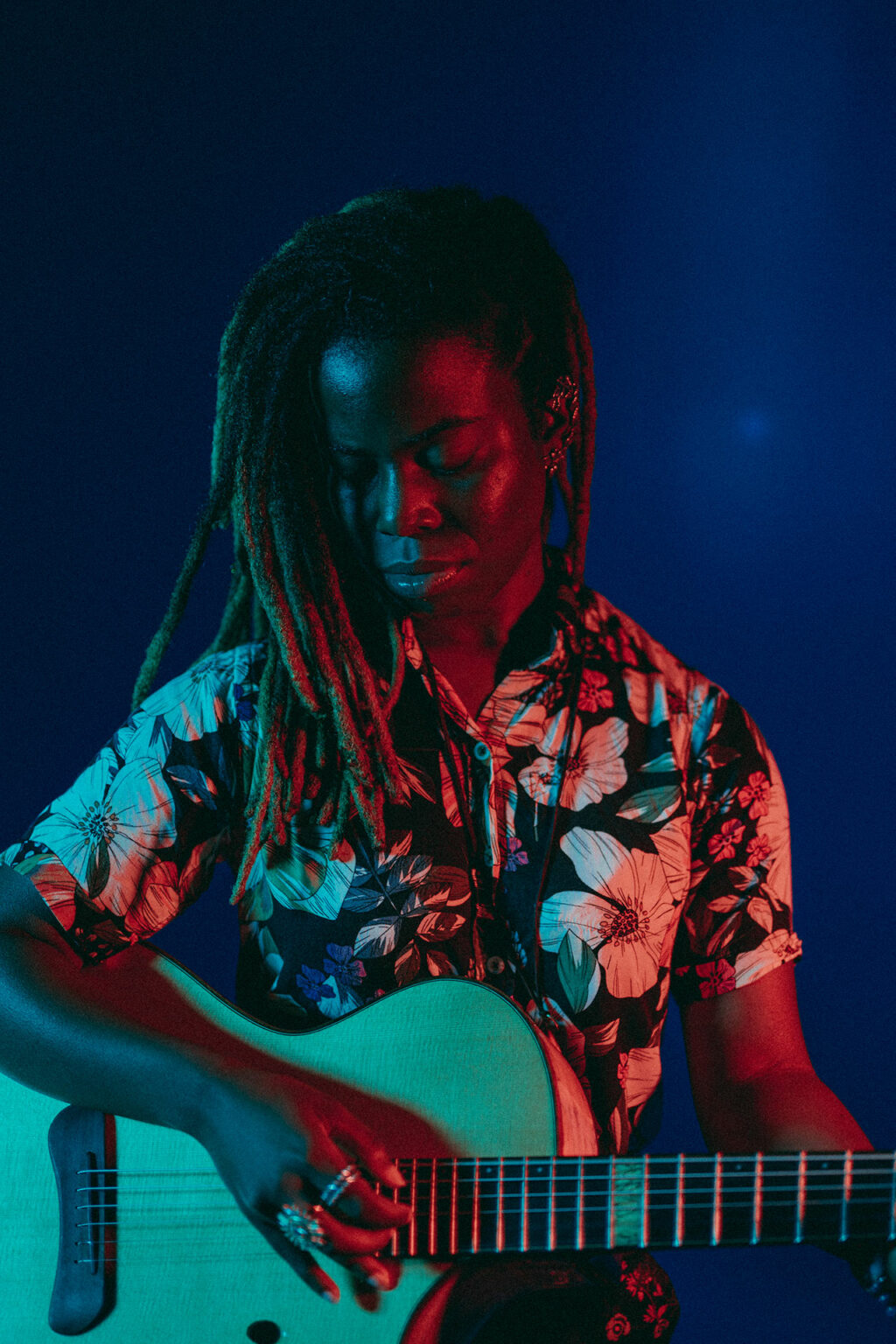 lap made it easier to beat the game at the expert level. That mountain climbed, she began playing an actual guitar, “… just run-of-the-mill power chords. I tried to learn hard rock songs and Nirvana songs and stuff that I thought I could manage.” Then she realized she could “take that Guitar Hero idea and do it on an actual guitar, and lap-tapping was the way I could do that. I figured that out two to three years after starting guitar.”

Williams cites the “smooth jazz and R&B" she listened to growing up, "Hendrix and Nirvana, go-go and hip-hop,” as formative to her sound, and calls out “Southern guitar players or Piedmont blues players, like Elizabeth Cotten, Etta Baker, Algia Mae Hinton and people like that.”

I find these name checks puzzling. Her music is reminiscent of the innovations of Michael Hedges and Alex de Grassi, and it stands strong beside Pat Metheny’s acoustic excursions. Yasmin acknowledges the similarities but denies these players as influences, asserting that she “came to her own voice before she was familiar with those guys.”

“I guess my definition of influence is a bit odd. When I say I’m influenced by something, nine times out of 10, it’s not going to come through musically. It’s more of a mental thing. Like Hendrix is a big influence for me, but obviously you’re not going to hear much Hendrix in my music. You’re not really going to think he’s a musical influence if you listen to my stuff. But the way he lived his life and how his career went in terms of him just being an extremely unique, larger-than-life figure is a huge influence on me. I think of Elizabeth Cotten in the same sense. She developed her own completely unique style, didn’t really care what anyone else had to say about it, just played the music that she wanted to play. Those types of things are way more important in influencing how I approach my own music than the actual music that they’re playing.”

“Afro-Futurism is extremely relevant for me because I didn’t know it existed until recently. And I think that ties back into why my influences are Black women guitarists, because I just didn’t know there were any. So finding Black female guitarists who play acoustic guitar in kind of a folky way, who have their own unique styles, is way more influential to me. And Hendrix, too.

"So Afro-Futurism is a cool thing to me. I want my music to model that in terms of Black musicians being able to play whatever they want to play, and not being pigeonholed into two or three genres that people think we do. We can do whatever we want and we can have a future in whatever genre we want.”

One of the salient characteristics of Afro-Futurist fiction—in stark contrast to old school, dystopian sci-fi narratives—is that no matter how awful the shitshow its protagonists must endure, the narratives typically end on an optimistic note, offering a thread of hope to inspire us to move forward, always forward.

Yasmin’s music is of a piece with this ethos. Even a composition inspired by dire circumstance, the BLM-inspired “After the Storm,” induces a harmonic atmosphere that reflects sadness and despair while encouraging aspiration for better times.

Shimmer at its finest.

Yasmin’s most recent album showcases a confident and mature musician in full command of her instrument and musical conception.

Urban Driftwood picked up a bushel of Best of mentions from platforms as varied as the Washington Post, Pitchfork, NPR, Vinyl Me Please, AllMusic, Uncut, Fader, and The Wall Street Journal, and she has been featured in Acoustic Guitar Magazine, Fretboard Journal, Vintage Guitar Magazine, Guitar World, Premier Guitar.

But forget all that. Just listen.

On this title track from Urban Driftwood, Williams collaborated with Amadou Kouyate, a 150th generation Djali of the Manding tradition of West Africa. (“Djali” is the Manding language equivalent to what most of us know as a griot, which is a French word, derived from a Portuguese word, applied to African artists. Just another colonialist hangover.) The liner notes frame this composition as Williams…

“… reflecting on her personal role in the context of the current societal moment, considering her position as Black female guitarist within a white male dominated field.”

“There are not many Black guitarists within this genre,” Yasmin says, “and particularly with all of the political and social discord that was/is happening in the United States in 2020, I felt it was extremely important to include a song on the album that was inspired by my heritage and paid homage to who I am, the household I grew up in, the music I listened to as a child. ‘Urban Driftwood’ is more like the music I grew up listening to than any other song I’ve released so far.”

While Yasmin promises more collaborations like this one on her next album, she remains committed to the solo format for her live performances.

"I don’t really have a problem with playing by myself on stage," she says. "I like the challenge of just putting on a captivating show all by myself. It’s ultimately pretty fulfilling when it’s successful.

“There’s just something about being a solo player, especially solo acoustic guitar, because the acoustic guitar lends itself to really anything you can imagine. It’s a percussion instrument. It’s a melodic instrument. Harmonies. Whatever you really want it to be. So I definitely don’t think I’ll have any band until absolutely necessary. I mean if I can get away with it solo, why not?”

Rob Rushin-Knopf blogs about culture at "Immune to Boredom."